Inside the Minds of Corporate VCs

The following is a guest post co-authored by Samir Kaji, managing director at First Republic Bank, and Jessica Peltz-Zatulove, principal at kbs+ Ventures.

CVCs participated in deals that deployed over $12B into startups in 2014, according to CB Insights, a number that is expected to be matched or exceeded in 2015. Notably, CVCs participated in financing totaling nearly $3B across 240 deals in Q3’15. This investment represented 14.1% of total venture dollars funded during the quarter. One-fifth of all venture deals in Q3’15 included CVC participation. Along with the increase in funding has come an influx of new firms. Since 2014, over 127 new CVCs have been formed, further validating CVCs as viable and valuable sources of capital within the startup ecosystem.

Given that backdrop, it’s important for operators to understand the distinction between CVCs and traditional venture capital (VC) firms.

In an effort to share some common themes within the CVC world, we surveyed a subset (n=34) of CB Insights’ most active CVCs to better understand the current landscape.

Objectives and Motivations of CVCs

In an effort to innovate at a pace afforded by nimble startups, CVCs often invest for primarily strategic reasons, with financial return being a secondary item on the decision tree. The vast majority of CVCs in our survey (4 out 5) named strategic value as key decision driver, but nearly the same proportion listed financial return as being equally important. This may sound intuitive, but it is significantly different from the messaging of early CVC arms. Additionally, firms such as Sapphire Ventures (formerly SAP Ventures) have publicly stated their primary motivation is financially driven. 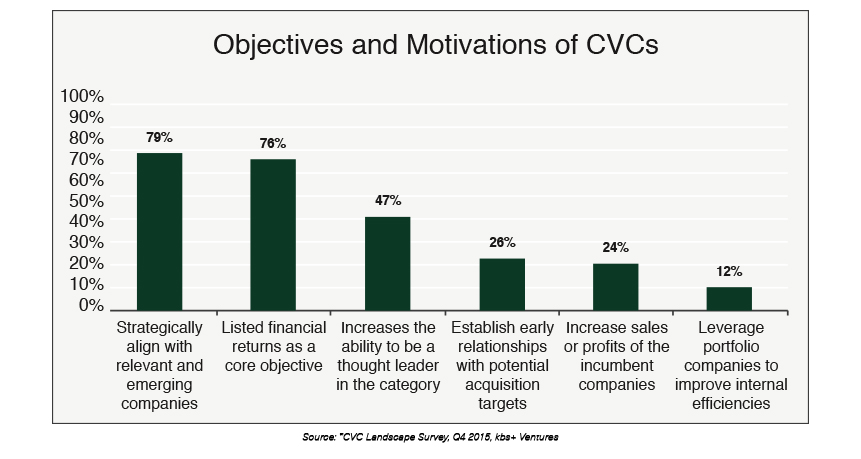 While vetting CVCs, it’s important for entrepreneurs to fully research a prospective CVC investor to ensure proper investor-company alignment. This should include understanding the unique pain points of the CVCs affiliate organization and determining whether your technology solution is symbiotic with their organization.

Only 9% of funds we talked to included personal capital from the company’s senior leadership. This is important for entrepreneurs to understand, primarily because micro-economic conditions specific to that company have the potential to impact follow-on financings or timing of an investment close. For example a CVC partner may request funding an investment in January (or the start of a new fiscal year) vs. December based on broader organizational mandates.

67% of CVCs have a dedicated venture budget of capital to deploy over a designated timeframe, while 29% of our survey respondents employ an “opportunistic” approach – making investments opportunistically throughout the year. Since the number of deals done each year varies greatly across CVCs, founders should inquire about how many investments the CVC has closed within the prior year to better understand the institutional commitment the firm has toward startup investment and support. The CVCs that do 10+ investments per year typically have dedicated teams and budgets to deploy to startups.

Note the chart below does not include follow on investments. 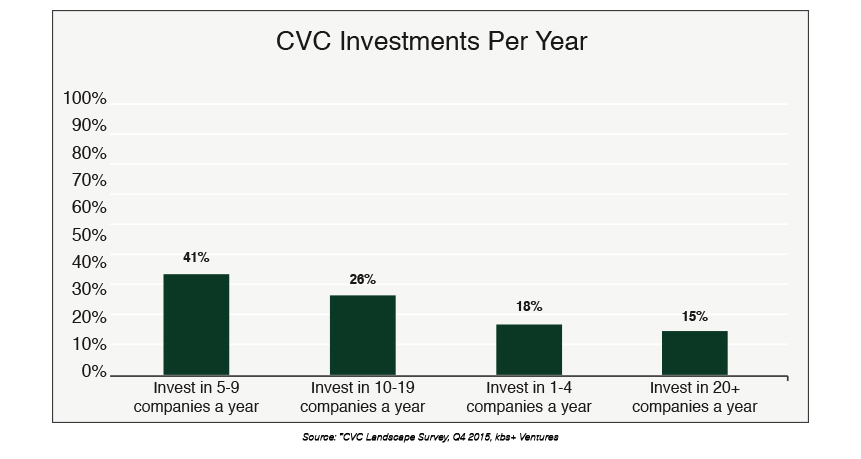 In contrast to traditional VC firms, partners at CVCs often cannot make investment decisions independently (there are of course some exceptions); senior leadership, business units, and various internal stakeholders of the affiliate company contribute to both the diligence process and final approval. 50% of CVCs weave the expertise and feedback of relevant departments into their due diligence process – while this improves the probability for the CVC to get buy-in for post-investment internal collaboration, it can also result in a deal not getting done because of a real or perceived lack of synergies within the CVC’s organization. 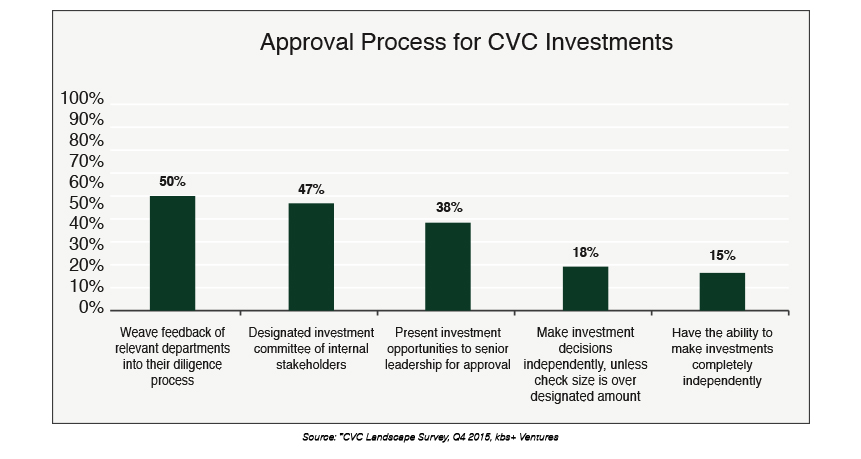 Of course the more complex the approval process, the longer the time from initial meeting to funding, an important consideration for entrepreneurs that are contemplating CVC capital. To adapt, CVCs have been accelerating the approval timeline to help ensure participation in time sensitive rounds. 59% of CVCs work to get approval (from the first meeting) within 2 months, while 32% project a 2-4 month turnaround, and ~9% estimate more than 4 months to come to a decision. Of course, this is also subject to size of investment and stage of company. 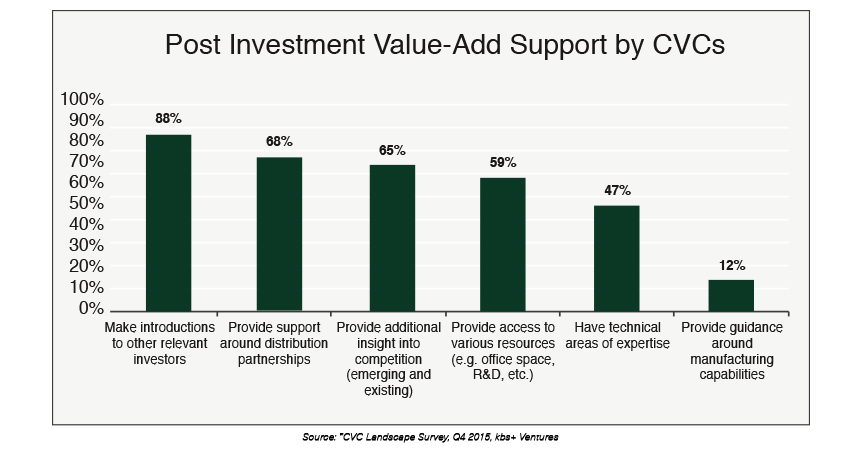 Founders should also do due diligence through reference checks to ensure that the value-add being articulated by the CVC has actually been provided.

A common concern around taking capital from a CVC is whether it could hinder the startup’s ability to optimize on exit through potential misalignments of interest. Conflicts could include selling product or selling the company to a competitor of the CVC.

Each CVC handles this differently, and this should be a serious discussion point prior to closing an investment. Of our survey respondents, only 1 in 4 CVCs have acquired a portfolio company, only 12% of our CVC group note they regularly include a right of first refusal clause in the case of an acquisition, while 80% responded that they do not put any limitations on exit scenarios.

Corporate VC will likely continue to see many new entrants in 2016, a positive for entrepreneurs looking outside just traditional venture capital as a large number of corporations are seeking avenues to innovate. To optimize on the right CVC partners will require thinking through fit by considering the points above.

Special thanks to Rohit Jain and GrowthX  for support.